Firstly, I would like to say that it is not me asking the above question! This came from one of my followers on Twitter, and it got me thinking. The reason that tweet had been sent, was they had found that since they were in remission, and treatment had finished, the amount of followers they had was rapidly decreasing.

They had very quickly put the two things together and made that assumption. That then made me wonder, and I looked at my own life since cancer, and many other people that I know, both personally, and via social media.

In several of my previous posts, particularly ‘my name is not cancer,’ I have talked about the fact that whether we like it or not, we tend to be seen as that person with cancer, rather than the person you were before. Personally I have got used to that now, but I know that people who have little experience of what we go through, have a quiet fascination to know more. I guess also, that in many ways we encourage that curiosity, by the awareness raising that we do. Also, if no one asked about things, we may just assume they weren’t interested!

I wasn’t using social media from the start of my journey, so I have no direct comparison, but an example that is valid, would be my fundraising . I started raising funds after my stem-cell transplant. There was a fantastic wave of enthusiasm by people to donate. As time moved on, that waned, and raising money became more difficult. Along the way, I have been seriously ill on numerous occasions and the donations have increased. Now, only currently having maintenance treatment regularly, and after 6 years, it is a lot more difficult to raise enthusiasm.

Is it then, our use of social media that gives us a ‘slanted’ vision of how people view us? A lot of people tend to judge their own popularity, by the quantity , and coming and going of followers. Personally I don’t. I have always tried to have fun, and make people smile. That hasn’t changed since my diagnosis. What has changed, is that I now use social media!

However, when I review my own journey, since diagnosis many interesting things have occurred, both good and bad. Since, and because of my illness, some incredible things have happened for me, and I have met people, and done things that I could only have dreamed about, in my life before cancer. There is talk in the future about a book. The ironic thing is, that there is little appetite for the first 50 years of my life, the most excitement, is about what happened after I was diagnosed!

Due to my cancer work I am now known around the world, through conferences and social media etc. Certainly that would never have happened in my previous life, but I would like to think that people enjoy what I do, rather than having an intrigue into my health issues. Or am I kidding myself?

Most of the patients that I know through here or personally, were quite happy getting on with their lives, until cancer came along. A lot of us enter the internet world, because we want to connect with like minded people, raise awareness and find out more information. We are passionate about what we do, and open our lives up to the world. This creates, in many cases, a swell of interest, generally temporary, short or longer term. Then our lives go back to a ‘new normal.’

Life with cancer, creates many highs and lows, physically and mentally. It can be difficult dealing with the physical side of things alone. At times there is a lot of attention paid to you because of your condition, not only from the medical profession. If there is a positive conclusion for you after treatment, it can be extremely difficult, psychologically, to return to everyday life. Maybe, without a lot of the attention that we were used to. 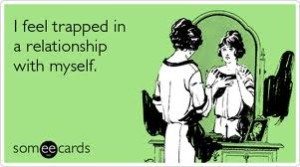 This year I will be talking at more conferences than ever before, only because of my illness. It is great that so many people are interested in things, and a valuable opportunity to raise awareness, but I would be doing none of this if I hadn’t got sick. Certainly my phone never rang with so many interesting people.

In my own case, I will never be far from this terrible disease, so this is part of my ‘new life,’ but I can empathise with people who might question, where all the people go, when they get better.

What is your view? How has your life changed? Is this an issue you have even thought about? I look forward to hearing from you.