As most of you are well aware, I am concerned about the way many of our giant cancer charities behave towards the people they purport to help. Working in a dictatorial manner backed up by aggressive advertising, funded by many trusting donors. Much of my work involves charities and my own experience shows me clearly two types. The ones that work very closely with others and those that don’t, who are now beginning to be isolated and out of touch despite their current income!

The most dangerous thing that I see, is that these are the largest ones, and I believe that their loud voices, backed by a never ending stream of all channel advertising, are strangling innovation. They believe they know best and they will give you only their solutions, which in many cases are outdated and not appropriate. The funds to smaller but more effective organisations are being strangled by them.

I have recently seen this well written piece by David Ainsworth who is the editor of Civil Society News and is an expert on all things charity.

“Of every £1 donated by the public, three pence goes to Cancer Research UK, finds David Ainsworth.
In recent months, we’ve heard a lot about how much the big players in the charity world really dominate fundraising. I wondered to what extent this was really true – what did the numbers say? The comprehensive estimate of money given by the public can be found in the UK Civil Society Almanac, published last month by NCVO. In the most recent year for which we have full data – 2013/14 – around £9.38bn was given to charity by individuals in the UK.

This figure is calculated slightly differently from the way charities themselves tend to measure voluntary income in their accounts. It includes individual donations, legacies, membership subscriptions without significant benefits, and gift aid. It excludes “fundraising by charities where benefit is received in return; charity shop turnover; sales of merchandise; raffles and lotteries; and fees for fundraising events”.

The figures below, based on accounts for the period covered by the almanac, roughly represent the amount the ten biggest charities raised through individual giving, although I’ve had to make a couple of estimates, because no charity reports their figures exactly the way NCVO breaks it down, and annual reports don’t include a huge amount of detail.
In any case, it provides a clear illustration of the extent to which big charities dominate the landscape.

So what does this show? First, that CRUK is a behemoth. On average, of every £1 donated by an individual in the UK, they get three pence. And it means that cumulatively the top ten charities account for roughly a sixth of all individual giving in this country. The top 100 account for almost half. These figures predate the fundraising crisis last year, so it will be at least two years before we can get a picture of whether these numbers decline, due to a change in public attitudes, or the impact of various regulatory initiatives.

One interesting question is whether the balance has always been this way. 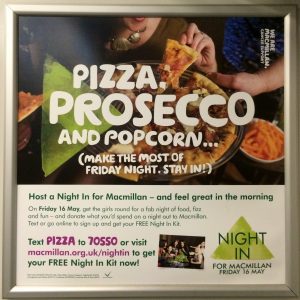 Or have the big charities obtained a bigger and bigger share of the pie? This is a particularly interesting question in light of some research that we did for the Commission on the Donor Experience, which suggests that total giving to charity hasn’t changed meaningfully over time, but that you can secure a bigger slice of the fundraising pie if you push aggressively to get it.

In other words, if the big charities have dedicated themselves to raising more money, they haven’t increased the amount donors give, but have effectively reduced the fundraising income of other charities. They may also, worryingly, have been using up public trust to do so. The number of complaints about charity fundraising have grown roughly sixfold in under a decade, according to Fundraising Standards Board figures, and most of those complaints are targeted at a very small number of very big charities.

In the light of all that, why does so much giving accrue to so few organisations? Obviously, it’s down to how donors behave.
Donors talk about preferring small, local charities, but obviously give to large ones. Donors say they trust international charities the least, but three of the top ten organisations are international aid organisations. Basically, we know that donors tend to give impulsively, to causes at the top of their consciousness, and to be easily swayed by the national mood.

The common theme here is clearly the power of the particular charities’ brand. These charities attract money because they are in the public consciousness. And they can use the money they get to stay in the public consciousness.
The final question is whether it’s a problem that fundraising income is being concentrated in the hands of a small number of charities. It’s hard to know, really.

On one side of the scales, it’s potentially dangerous to have most of the money collected in one place because it could stifle innovation and variety. In addition, there is certainly a feeling, inside and outside the sector, that any charity this big can’t really understand the needs of their beneficiaries. On the other side, there’s a question of efficiency. After all, these big organisations can harness economies of scale, and deliver strong outcomes.

The public don’t particularly like the idea that charities have got this big, but it’s also not clear to me that the public really have any idea what they’re talking about. If this is the best way to deliver outcomes to beneficiaries, we need to change the narrative which dominates the public mindset, not change charities to fit in with the whims of ordinary people.”

Of course charity means different things to different people and we all have our own selected causes. Please feel free to share your own views and experiences below.