The one thing about cancer is that we are all unique in the way we are affected by it, not just physically but emotionally too. Most of us will have a personal connection in some way, and have opinions about what is the best way to deal with things. We all seem to have words we love or hate to describe things, some use the fighting analogies, and others hate that. I use the word journey to describe my experiences, many people don’t like that one! Survivor is a word I use carefully where cancer is concerned, and we all have very different understandings of it. Personally I consider I am surviving cancer currently, but don’t class myself as a survivor. Some may reach the 5 year or 10 year anniversary of their diagnosis and consider they are a survivor. As with all things cancer it is ‘different strokes for different folks!’

In 2007 surviving my disease became my only focus, but as I continued to survive it I considered I started to thrive in my life, (although within the confines of very complex health requirements.) The positive stuff was outweighing the negatives, which was important to me. Fortunately that continues to be the case even as life gets a little tougher currently. Communicating with so many people across the world, I have learned that we all have our own perceptions of living with cancer. This is why I consider it to be so important to share experiences so we can all learn from each other.

Recently I was contacted by a lady in Canada who wanted to share the story below. This is how Gayle dealt with her issues, and I’m delighted to be able to feature it here today.

“In 2006 Gayle (BC, Canada) knew that something was wrong with her body, in particular her breast. She went to see her doctor, had many tests and was told that she was fine. Luckily she followed her instincts and pushed to figure out what was wrong. Then as she turned 40 she found out that life didn’t necessarily begin, but could possibly be coming to an end. Sure enough, Gayle had breast cancer. 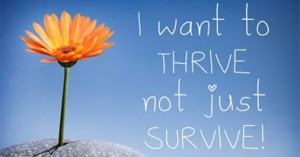 Not only that, she had Inflammatory Breast Cancer, a type of breast cancer about which not a lot was known at that time and the rate of survival wasn’t good. Gayle’s fight was a long one of chemo, radiation, herceptin and eventually surgery. She faced it all with courage and as much dignity as you can possibly have while going through cancer treatments. Most of all she faced it with humour and positivity. As her friend I was blown away by her bravery.

The hardest thing for Gayle to accept was the news that she would have to wait 10 years to know for sure if she was a survivor. The injustice of this label “Survivor” hit her very hard. What if she didn’t make it 10 years? What of those who fought with everything that they had and yet didn’t manage to beat their disease? Were they losers? Surely not! And then one moment changed it all when she realized that she was doing something so much more important than merely surviving, she was THRIVING!!!!

Thriving is the choice not to let cancer or any illness be the defining thing in your life. A spark was lit in us. I knew that I had to show the world the Thriving spirit of my friend and we began writing and filming our documentary “Thrive the Movie”. Gayle began writing her book. We brought the Thriving philosophy to the World Conference on Breast Cancer in 2008 and the reception it received blew us away even more. The message that “While you are waiting to survive you can choose to Thrive” was like a cool breeze on a hot summer’s day. It was a mantra that all of these women from vastly different backgrounds and different countries around the globe could all stand united behind whether they were at the beginning, middle or end of their cancer journey. These women took this positive thriving message away with them to their home towns and countries.

Alas the global financial crisis hit and our documentary was put on hold, Gayle’s book was also put on hold and life moved on.In 2013 we realized that the Thrive message was far too important not to share with the world and we found a way to make our documentary happen. We found Thrivers to introduce to Gayle in the hopes that we could rekindle the spark that shone out of her all those years ago. We flew her half way around the world to meet them and boy did they nurture her already Thriving spirit.

We finished filming and in April sent our beloved work, filled with our blood, sweat and tears off to the Toronto International Film Festival where it is currently under consideration. The new Thrivers Gayle met on her journey have inspired her so much that she is finishing her book, something that she hopes will light a Thriving spark in others. We have launched a kickstarter campaign to help us to complete and publish her book. https://www.kickstarter.com/projects/1473167744/thrive-0 It still amazes me that when you go looking for inspirational, giving and caring people, that you can find them everywhere. You just have to have your eyes open and be on the lookout. We hope that our movie “Thrive” will inspire you just as much as the Thrivers we met have inspired us. (stayed tuned for our soon to be released trailer). (www.facebook.com/pages/Thrive-the-Movie/230723883750620?sk=timeline)”

Thank you Roisin and Gayle for the inspiring story you share with us, and I wish you well with this incredible project!

Do you consider you are surviving or thriving, maybe both? Do you have words you use and words you don’t to describe your cancer experience? As always it would be great to hear your views and experiences below.