There was a select audience for the Britain Against Cancer conference held in London on the 5th of December. Now that is a big statement name, and I hadn’t even been invited! I immediately wanted to know more. So I went onto the website and found that you could BUY a ticket for £100+, but it also told me that if I was a person affected by cancer I could apply for a FREE ticket on a first come first served basis. I duly did and received one which allowed me to go. Also attending were politicians, NHS, pharmaceutical companies, many charities and some more patients. Not surprisingly as always the patients were in a very small minority. Quite strange really as all the things that were being discussed were about them!

I was there with my great friend Jo Taylor from ABC Diagnosis, a fantastic patient resource, who had been selected to sit on the expert panel. We went with hope, because there was a patient at least on the panel. However, most questions were filtered through a website and selected by a facilitator. Nothing too tricky for the NHS or politicians to answer! Most of the guest speakers were very senior politicians, including Jeremy Hunt, and leaders of the cancer teams within the NHS. This conference was an all party one and facilitated by Macmillan Cancer Support, (of course, who else would it be?)

The first session was taken up by discussing a very important report to improve cancer services, which is already running a year late.

Apparently it is due to be published in 2020. All sorts of usual argument were put, as to why it was already late. I queried if it would even be relevant by the time it is published. Most of the people contributing will be retired before it is finished! The day didn’t get any better than that, as I listened to political jousting, by charities and the NHS as to why we have some of the worst results in Europe. My personal low point was a session about patient engagement hosted by Breast Cancer Now and including Sean Duffy from NHS England. The poor patient rep on the panel looked like she was forced to be there. Naturally there was so much waffle from the panel, that by the time it came to audience participation we were ushered off to see Jeremy Hunt who had arrived early.

None of the people there including Mr Duffy had any real idea about proper patient engagement, and they were happy to fund more ‘pieces of work’ to find out more. Interestingly social media was never mentioned when discussing this subject! That summed the day up for me really, it was like the blind leading the blind. No dynamic leadership, only the same old faces going round on the ever spinning money machine which is politics. Whilst trying to cosy up to politicians who are generally trying to further their own careers, and keep their jobs, we have taken our eye from the main goal. Macmillan, Cancer Research, Breast Cancer Now and several others, are spending millions of donated money in political influencing. The NHS has so much trouble to deal with I am quite pleased that cancer is still as high up the agenda as it is!

Of course I appreciate that we need to make some plans but nobody who counts seems to realise that people are dying daily from cancer. We are all affected by it, and it’s not about us and them. 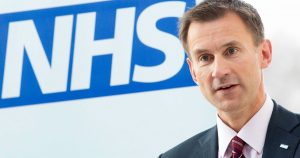 Whatever we do for a living there is a good chance we will all be a cancer patient at some stage, and it is just not acceptable that we should have some of the worse results in Europe. I can see no dynamic leadership in this sector, and even less of a ‘can do’ attitude. All I hear is negativity and constant talk about money. No business is ever going to have the amount of money they say they need, and an endless supply of cash is not going to solve the underlying issues of our health service.

Everyone at the top table of cancer, seems very cosy there, of course they are. But who are they accountable to? Surely us as the paying ‘customer?’ If this was a business, they would all be sacked seeing results as bad as we are seeing, from patient surveys etc. But no, they all move round the table so that there is apparent change. Our healthcare is far too important for politicians now, my working experience is showing me that. All good people who have good intentions, but not effective anymore. Charities and the NHS is another cosy relationship. The same charities working with the same organisations giving us the same results. None of their work is measured by impact, just talk about the money they spend to help people affected by cancer.

Unless patients are treated as equals in this, nothing will change. Simple things like offering to pay for the patients time, and having meetings outside of working hours, is a start. People affected by cancer have a lot of goodwill and want to use their experience to help others. I fail to understand how this is not valued at all. Surely we are the missing piece of the jigsaw and the true picture will never be seen without us at the table?

As always these are my own views drawn from my personal experiences. Please feel free to share your own. Maybe you are happy with the current arrangement? In 2018 I will be revealing many more reasons why this cosy arrangement is not good for people affected by cancer. Also, how many charity giants fritter your donations on self promotion.