In recent weeks, I have seen a lot of comments about the relationship between large corporations and the charity world, which have confirmed some of my ongoing personal thoughts. Like most things in life, it goes in cycles. Years ago, charities struggled for publicity, to initially tell people about what they were doing,thus making it difficult to raise funds.

However, over the years,being involved in good causes, has become more ‘trendy’. It was realised that to raise the profile of your organisation, you needed the help of someone in the public eye.So, very slowly, public figures engaged with their favourite good cause.It was no coincidence, that those organisations began to grow, and realised that this is the way forward financially.As the money started to trickle in, it became obvious, that you needed to spread the word further, and get more people on board, to hopefully turn the trickle into a flood.

It is fantastic, that celebs are getting more involved in the charity sector, however, some of the more cynical amongst us, may also notice, that as their good work increases, so does their personal exposure, leading to, in most cases, a vast increase in sales of books, films, cds,dvds etc.

The closing ceremony at the 2012 Olympics, was a perfect example. It was a wonderful show, and I enjoyed it thoroughly, until I read the amount of cynical plugging that had happened throughout the evening. The worst example being George Michael and his new single!

The marketing teams, that most organisations seem to have these days, soon spotted an opportunity, to ‘shoe horn’ their products into awareness weeks, with probably the most over hyped, ‘Pink Month’ being the prime example. Interestingly, this year, I have heard so many ladies mentioning how upset they were that this month has been taken over by organisations trying to sell anything in pink!

To bring this post right up to date, it wouldn’t be right if I didn’t mention Lance Armstrong.His case has been well documented, and involves massive sponsorship from companies like Nike, and Oakley.His charity, and fund raising, was a phenomenal worldwide machine.It is fantastic to raise so much money to help people affected by cancer, but I can’t help thinking about the various agendas involved there.So many conflicts of interest.

Just this week we had some ground breaking tv, with ‘Stand Up 2 Cancer’ A brilliant idea! Putting the subject of cancer in the public domain in such a way, and on main stream television. I thought it was incredible, how far, we as a society have come, where we can now accept, and talk more openly about the subject. I only caught snips of the show, to be fair, and I have heard about the many inspirational stories. But the bits I saw, looked like an extension of the Alan Carr show, but raised a lot of money, I’m sure.

With the introduction of social media, meaning we can now share things in an instant around the world, we have very powerful tools, to help us raise awareness and funds. However I can’t help thinking that we are going too far too fast. From very little information about our favourite good causes, we are now under a constant barrage, to donate money, and the ways that we can do it, have also become easier.Credit cards, texting, donating online, directly from our salary, the ever popular clothing recycle bags, door to door campaigning, even leaving money in our wills, is becoming easier. Wherever I go, I am constantly having a bucket waved under my nose, for causes I have never even heard of. 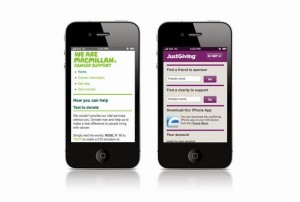 My personal feeling is that, if we are not careful, people will feel less willing to donate to causes that are too ‘In your face’. In the tough economic times that we are encountering, obviously, people are less likely to want to give money to charity. Thus without the income, there will be less good work happening. Of course, none of us want to see that happening. But currently we have an open battleground, where all good causes are competing for our cash. Each, trying to gain market share.

Does this mean a scenario where the largest organisations with the biggest marketing and media teams clean up, and local organisations go to the wall? I guess, the choice is ours really.It is up to us to choose to give where we feel our donation can make a difference. Good cause giving, is a very personal thing, and we all choose to support what is close to our heart. I would like to think, that our giving wasn’t dictated by celebs and marketing campaigns, but I’m sure it must be, or those factors wouldn’t be increasing.

What do you think? Will you feel differently, when you next donate money?