It is very rare for me to write about things that have already had enormous publicity, as I normally ask myself two questions before I write. The first is can I add anything to what has gone before and secondly, will my readers be interested enough to read it?  In this case I have read a lot about the incredible Dr Kate Granger and we were also ‘Twitter pals.’ Like so many of my friends on social media, we shared our stories openly for the benefit of others. Also like many we have lost, Kate will leave a massive hole for everyone who knew her.

I don’t want to cover much of what has been talked about before, but I want to use her example of what is really possible. We are all aware that on the whole our health service is a wonderful thing, but of course like with any other large organisation there is room for improvement. Before social media became commonly used, patients would work with other patients, and health professionals within their own organisations. There was very little crossover sharing of experience and expertise. But now the barriers have slowly been broken down, with initially people affected by cancer connecting to make their voice a stronger one, then followed by health professionals joining the discussions. The part that the Internet has played in this progress cannot be underestimated! It allows us at the touch of a button to share our innermost thoughts and feelings with the world.

Kate realised that as a member of the health profession she was in a fabulous position to influence things, and because of her own personal experiences did an incredible job of that, whilst going through her own very traumatic issues. As time went on she realised that her influence was growing within the cancer community, and did everything she possibly could to ensure that she would continue positive change in the service. 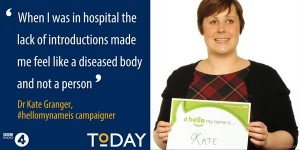 With her #hellomynameis campaign, it swept through the N.H.S like a tsunami, and everyone revisited their ideas on how to deal with people affected by cancer. More importantly, it seemed to create a ‘bridge’ between patients and clinicians which suddenly felt easier for everyone to cross. It opened up dialogue, and when you add the incredible presentations that Kate was still delivering, the way we support people living with and beyond cancer was on everyone’s lips. What an incredible legacy has been left behind. Like many taken by cancer before her, there was still so much to achieve, but the impact that Kate made in her relatively short life will undoubtedly live on and be built upon by many. We might often think how can we make a difference on our own, but here is an incredible example!

I have attended many meetings in recent years about improving support for people affected by cancer, and I can’t remember one where the cost was not put up as a barrier for improvement, both by charities and healthcare organisations. I have continually argued that it is not always about the cost, as it is the little changes that can make the biggest impact. My opinion is that finance is an easy way to sidestep a problem if you want to avoid it. My business work has rarely been about increasing spending, in fact quite the reverse! It was always about making money work harder for me. Of course it is more difficult to do than just opening up the purse again, but ultimately it is important to make things sustainable which is the key for long term impact.

What was achieved by Kate and her colleagues with that particular culture shift, cost absolutely nothing and look at the impact it had! Of course the idea was fantastic, but what gave it the real traction was the fact that Kate was speaking to her colleagues. 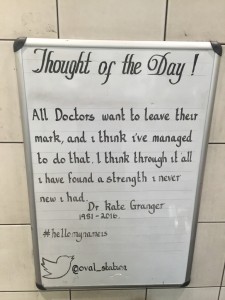 I’m sure this wasn’t the first time that a professionals approach had been queried but because it came from a peer it felt more powerful. The message got out there quickly and was adopted by many. My hope is that this drastic improvement in communication can continue, and our clinicians will see the expertise which we as patients can bring to the table. Let us continue expanding on this legacy as Kate would want.

Most problems we face in life can be solved by much improved communication, and we can certainly solve more by working together as one. Last week I posted a piece from a senior clinician and it was one of the best read as everyone was interested in the view from the ‘other side.’ But actually his views were very similar to mine, but the blog was read by many more professionals who wouldn’t have otherwise seen it. Now many more health organisations are engaging and understanding that there is a lot of expertise outside of their own system. There is now much more knowledge of the work that people like me do and more openness in the sector. Again, it is not so much about finance but more importantly about attitude.

What Kate has left us with is the fact that we know that big change can happen with very little cost. It is important that we continue to understand that and keep the momentum going forward. Cancer support is a very complex subject and every time we lose someone we talk about how things must improve, and they are, but not quick enough. We can do better, with smarter thinking and better communication, but there has to be a will to make those changes and not lose the progress that Kate has helped us make. Her legacy deserves to be a lot bigger so let’s not let her down!!