The lack of support I found on my own journey led me to do the work that I do, and although things have improved in that seven years, this is still an area that leaves much to be desired, and why I decided that I would personally try to improve this for others unfortunate to be affected by cancer. After years, of volunteering and gaining practical experience, then adding blogging and social media to my work, I can see that I am starting to reach the numbers of people I could only imagine, many years ago. My own experience showed me that a more realistic type of support was required, and I viewed that many issues are common for people affected by cancer, whichever tumour type they had. This is why I work with many diverse charities across the country, as when I hear cancer, I see people, not a specific disease.

The talk on everyone’s lips in the charity world is the impact that the incredible Stephen Sutton has had. Due to the power of social media his campaign went global, and the money is still coming in, reaching close on four million pounds for The Teenage Cancer Trust. But in amongst all the hype, was the fact that Stephen was diagnosed with bowel cancer in 2010. Yet another incredibly young person taken by this disease, which if diagnosed early enough, can be dealt with.

I was asked, if Stephen was raising money for bowel cancer, whether the total would be as high. My opinion was that it would, as I felt that people were donating for Stephen, and whatever cause he was following. But that question got me thinking! We have some big brand charities, which are commercially very popular, and cover many of the more common, publicised cancers, but it’s very true that there are many cancers that receive very little support and funding.

So what makes one cancer more of a priority than another? Of course when looking at limited resources, the financial element must enter into the argument. But in my opinion, anyone affected by cancer should be able to access the same support. Cancer is life changing, whichever one you have. In recent years, marketing has played a massive part in raising awareness, but my feeling is that the tumour types that don’t have the money, can’t afford the advertising campaigns, and are getting left behind.

The celebrity culture we now live in, can certainly help with this, but it feels to me that we almost have cancers that have become ‘fashionable,’ and others, because of the nature of them are not so. Many cancers have entered the ‘main stream,’ and are accepted commercially, which enables us to do good things with the money. But others despite the continued loss of unnecessary lives, are not.

Let’s be honest, talking about our vital organs is not something we will do willingly. Particularly things like our own bowel movements! Still so many young people die of bowel cancer unnecessarily because of lack of awareness, and hesitation to talk about ‘what happens downstairs.’ How do we break that cycle? 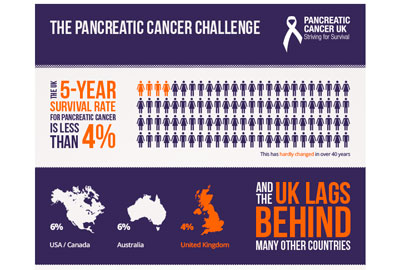 Many members of my social media belong to four different tumour types, bowel, pancreatic,womb and brain. I know from the work I do and the conversations I have, that there is very little support around for those people in comparison to what is available for other cancers. Is it that we have made great strides, in talking about cancer generally in the last few years, and these will catch up with the others? Or are they destined to be the bridesmaids of the cancer world?

Does the solution lie purely in increased funding and marketing? We have come a long way in the cancer world in recent years. from it being classed as a ‘death sentence,’ and being whispered about in corners. Now it is common to see adverts and articles daily, but still some cancers remain outside of that. I can’t imagine that situation will remain long term, but my concern is what happens for those people that have these less ‘popular.’ diseases now?

Most people look to specific charities for support and I have been to many of those. A few of the busiest ones look like call centres with the numbers of staff they have, but the average ones have few offices or staff. If you have one of the rarer cancers, it is quite likely you may need some very specific help which no other organisation can provide. New charities are starting all the time. that want to fill in the many support gaps, but the key here is sustainability. The big, established organisations seem to be taking the larger slice of the cake.

In summary, I liken the charity world to  the sea. There are sharks and goldfish swimming together. When the food gets distributed the larger fish get it all, and the goldfish eventually die. Maybe this is the time for more collaboration between organisations, as this issue is not entirely about money. Ultimately we need the people affected by cancer to all have the same opportunities for support which is currently not happening.

What are your views and experiences? Can you see a way that might help rarer and less popular cancers. Is it entirely about money?