October is Breast Cancer Awareness Month as you are all now well aware. The whole of the world seems to have turned pink, in what I consider to be a vulgar worldwide commercial venture. But it is only in relatively recent times that most of us understood that men get breast cancer too! I know from the huge efforts publicising my own projects how much work must go in to ensure that men are also talked about in the same breath as breast cancer. So I am truly honoured to feature the below piece from my great friend Bret Miller the founder of the Male Breast Cancer Coalition, in Male Breast Cancer Awareness Week.

“Why did I, Bret Miller, start the Male Breast Cancer Coalition? Well let’s start from the beginning. I was 17 when I first found my lump under my right nipple. I visited two different doctors during my senior year of high school. They both told me the lump was a calcium build up and that it would go away. They said I was going through puberty and “becoming a man.”

Seven years later I graduated from college, landed a steady job at a country club managing their pool and ice rink and had my own health insurance for the first time. 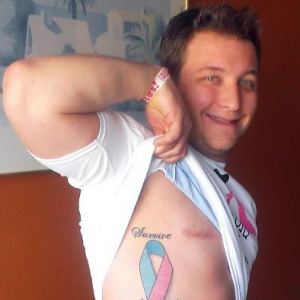 I decided it had been way too long since I had a physical, so made an appointment with internist. The doctor did the routine work up and all but checked me out, until I stopped him and asked him to look at the lump. He didn’t check my breasts during the exam. He paused looked and said, “You need to go get an ultrasound.” Little did I know this meant I was walking into a women’s clinic for the first of many appointments to come.

I felt embarrassed to walk in for my appointment knowing I would be the only guy patient. As I sat down to fill out the paperwork the questions asked were, “Are you pregnant?” or “When was your last menstrual cycle?” There weren’t very many questions I could answer. They did the scan and had the on-call doctor check to make sure they captured what was ordered by my doctor. This doctor did a triple take between me and the ultrasound and thought I should also have a mammogram, “Just so I didn’t have to come back in.” I think the doctor, a female, had an idea of what I was up against, but she didn’t mention anything.

I met with one surgeon and decided to take the lump out, thinking it was nothing but a cyst. The day following the surgery, I received THE CALL from the doctor and he said those words, “You have breast cancer.” He hadn’t fully read the report, would do so “soonish” and call me back in two or three days. When I eventually told my mom, she jumped on that doctor like a lion. We met with him the very next day! We listened to what he had to say and decided to get a second opinion. That’s when we met with the extremely talented Dr. Lon McCroskey. He told me he had performed mastectomies on 12 men and if I wanted to talk to one of them, if I had questions, he would try and get me in touch with them. 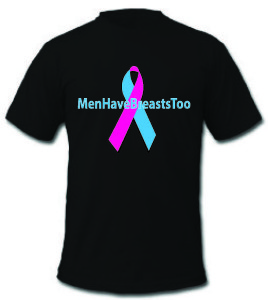 Almost all of these men had taken vacation time off from work for their surgeries, rehabbed and went back to work like nothing happened. All while having a mastectomy scar below their shirts. Dr. McCroskey made a promise to me that he would do everything in his power to make sure this cancer was gone from my body, if I made a promise to him. The promise was I would help put a face to male breast cancer. At that moment I knew I had a new mission in life. No man would ever feel alone again when he heard the words, “You have breast cancer.” I decided to start the Bret Miller 1T Foundation because I knew if I helped just one other man, my mission would be complete. Within the first six months of my diagnosis, I spoke with my very first man. It was a great feeling. I felt complete, but knew I was not done and had to keep going.

Through the power of social media we, my mom and I, have been able to connect with so many talented people across the globe. Facebook brought us to Cheri Ambrose, formerly of the Blue Wave. We connected instantly! We decided to form the Male Breast Cancer Coalition and have not looked back since. Lori Berlin, Cheri, my mom Peggy Miller and I all reach out by phone or email to new survivors and welcome them to our MBCC “family.” Along the way, we have met hundreds of survivors willing to share their stories on our website or in our ongoing video series to get the word out, because “Men Have Breast Too!”

Yes, we have breasts. We have mastectomies. We have chemo. We take Tamoxifen and can have side effects just like women. We should not feel alone.

MBCC has become an international organization helping men around the world with their diagnoses and we are growing every single day. We are becoming more than a vital support system. I hope soon we can help men with their medical expenses, provide mammograms for men in need, award scholarships for men to attend conferences and other events to learn about breast cancer in men and advocate for our brotherhood. I want to continue to honor the promise I made to my surgeon, but we can’t without the help of others. We need everyone to know men can get breast cancer, because it does not discriminate.”

Thank you so much Bret for sharing your incredible story with us! #MenHaveBreastsToo