Working and living in the world of cancer as I do, can be very tough at times. But as time goes on and my work becomes more established, it is a pleasure to be able to help so many people. With the rapid expansion of the Internet it means that it is very easy to communicate around the world and I am grateful to Helen for getting in touch from Australia! She is facing some tremendous difficulties since having her treatment, and was finding it hard to find people facing similar challenges to communicate with. I am delighted to share Helen’s incredible story and I know she would be thrilled to hear from you!

“Fourteen years ago I was successfully treated for Uterine Cancer, grade 3. I had a radical hysterectomy, followed by 28 sessions of radiation. 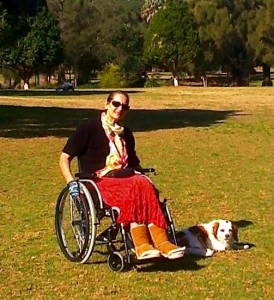 Appointments for the next ten years followed, during that time there was no sign of cancer. Mine was a success story except for the Lymphoedema that started, in my left leg, immediately after treatment ended. This was as a result of removing 22 lymph nodes, in the groin area, followed by radiation. I have written extensively about my journey with lymphoedema in my blog, “My Lymph Node Transplant“. I thought that Lymphoedema was a bad enough side effect of cancer treatment but nothing prepared me for what was to follow.

In 2010 I started to experience some Peripheral Neuropathy in my left foot. I blamed this on the Lymphoedema, maybe due to the compression garments or swelling. In addition I started to notice a slight weakness in my legs going upstairs. In 2012 I went to the doctor as I was starting to have problems in both legs. I had blood tests and an examination but this showed no particular problem. Over the next few months I started to have a few falls, my toes would catch on uneven ground, fortunately there were no bad injuries just embarrassment!! By 2013 things were getting very difficult, I decided that I needed to see a neurologist. My first neurological tests were in December 2013, I was still able to walk unaided but lifting my feet was the main problem, at this stage I did not experience pain, but had a pins and needles sensation. The neurologist confirmed that there was definitely a problem and that it could be Radiation Induced Lumbar Plexopathy. This was the first time I had ever heard of RILP, damage caused to the nerves and small blood vessels in the pelvis from the radiation during my cancer treatment. However he explained that this was very rare, only 0.16% per 1000 patients and that he wanted to do more tests, to eliminate any other causes. An immunologist, another neurologist and a respiratory doctor saw me. I had CT scans, MRIs, a biopsy, blood tests, x-rays, ultrasounds and nerve conduction tests. After a year of testing, during which time my condition deteriorated, my neurologist said it was definitely RILP and that there was no treatment. He suggested I do rehabilitation but otherwise there was no treatment. He also had no idea how far it would progress, I was already using two walking sticks and things were terribly difficult. I was devastated, it was as if I had hit a wall where no one could treat me or explain why this was happening.

The first three months of 2015 were spent in a rehabilitation hospital taking part in their intensive Neurological Program; it was during this time I became paralyzed and experienced nerve pain, even my rehab doctor had not seen this before. 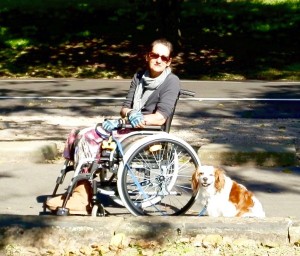 She had treated women with Brachial Plexopathy after radiation for Breast Cancer but not Lumbar Plexopathy. During my time in hospital I learnt to use a wheelchair, I developed my upper body; I worked with physiotherapists and occupational therapists to prepare me for “Life in a Wheelchair” (blog)

This was a terrible time, we had to sell our house and find a new home suitable for a wheelchair. There were many tears of sadness, frustration and anger at my situation. It soon became apparent to me that I did not fit in any “box” medically, I was not a spinal injury, did not have MS or Diabetes or anything that people understood. I was in no mans land medically, grateful that the cancer had not returned but devastated by this late stage side effect of Radiation. I believe that as cancer treatments become more successful we will see more late stage side effects. The cancer community needs to embrace these patients and give them the support and understanding they need. Doctors should be more aware of the possibility that these and other side effects could occur. Their job is not finished at the end of treatment. These effects can happen from 1-30 years later so we need to be aware of the possibility and seek help as soon as possible. Maybe someone reading this will recognize their own symptoms in my narrative.

I would like to thank Chris for allowing me to share my story. I have recently reconnected with my Radiation Oncologist who has agreed to give support and to also learn from my experience. He said that he knew this was a possibility but he had not actually seen it. Through my blog I hope to build awareness and understanding. I encourage others to share their experiences. No one should have to deal with this alone…..”  Helen