For most of this winter, I faced my nemesis. Constant cold, damp weather.For a man with the poor immune system that I have, I tremble when watching winter weather forecasts. I seem to stumble from cold to flu,to everlasting chest infection.Finally get rid of that, then the next one starts.Feeling under the weather (literally) for long periods takes it’s toll on me, as I try to continue with parts of my life.

I am now towards the 6th anniversary of my diagnosis, and when reviewing the things I faced, there are times that I honestly don’t know how I have the strength to continue. I thought of something that immediately made me smile, and then I realised. Only my humour could have got me this far.

This post was written about a year ago, but I realised it is as appropriate now, as it was then, and is still what helps me cope, so I would like to share it with you all today.

Humour plays a very big part in my personality, and always has done. I have always been able to see the funny side of most situations, even if sometimes there doesn’t appear to be one! In my life before cancer, it certainly helped me with my work, as everyone remembered me as ‘that funny guy’ and in a very competitive industry, it seemed to give me an edge.

When I started coming to hospital, I was aware that things were going to be very different to what they had been, in many ways! I was spending a lot of time in waiting rooms, doctors offices, and the chemo ward.How was this going to affect my personality? Was I going to lose my sense of humour and get depressed?

Ironically, that was one of my biggest concerns, not so much my schedule of treatment! What is there to smile about in a room full of people who are very unwell, having very toxic treatment? I approached my first chemo session very quietly and cautiously, after all I was the new boy in town! My idea, was to watch and learn how other patients were dealing with things. It was relatively quiet, some people reading, listening to music, or quietly chatting with friends. Others just sitting there on their own in quiet contemplation. 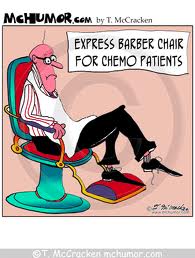 My bags of chemo were ready, now just the cannulation! Ah, my veins are difficult, here we go! It took two or three nurses to try and cannulate me, with my arm being put in hot water, cold water and eventually sister taking over and finally succeeding. What I hadn’t noticed was that people were quietly watching how the new boy was getting on.Slowly people were talking about how they couldn’t watch as the nurses tried to find my veins. Very quickly my old self returned and I was laughing and joking for the rest of the afternoon!
At the end of the session, a lady approached me, who’s husband was having treatment at the other end of the room. She asked me what chemo rota I was on. I said I was every two weeks, why? (I thought I may have been too loud for her husband, as he was a very quiet man) She told me that her husband was also having treatment for the first time, and he was frightened. But he had laughed so much during the afternoon, he had almost forgotten about his treatment! He then wanted to be on the same rota as me.The nurses also mentioned to me that they enjoyed the sessions when I came, as there was generally a lighter mood.
I will never forget Terry, who was an ex serviceman, who had Myeloma. We met as inpatients. We both complained about our food, and although we were in the same ward, we were in isolation units so we used to ring each other and discuss our days. He would always tell me a joke or two. We always met in the same clinics and the staff dreaded it as we never stopped laughing. Unfortunately, Terry’s situation got worse and he was very soon in a wheel chair, but we made a point of meeting and sharing a joke or two. I used to joke with him about having to slow down, as he had his chair.

Unfortunately Terry passed away, and his wife asked me to come to his service of celebration. Everyone had to wear bright colours to reflect his personality. After the service, his wife thanked me for coming and she told me of one of the last things that Terry had mentioned. He talked about how ill he was, and as he was a religious guy, he talked about going to Heaven. He then told his wife, that in the nicest way, he hoped it wouldn’t be too long before I joined him there so that we could continue our fun!!

That is when I truly understood the power of humour in a cancer environment.I do appreciate that it is not for everyone, and not for every occasion, and I am always very aware of people I don’t know, in case it is not for them, but sometimes some serious things might just seem not quite so bad, with a little added humour.

I know that sometimes it is difficult to find a smile at times, even I struggle on certain days, but I have found that humour is what gets me through. It has been my defence for tricky situations and has always served me well.It is not rehearsed or learned, some of us have it, and some don’t, but don’t we look at life differently if we are laughing? 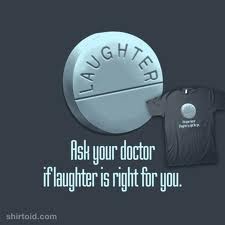 I have just found this piece on the web: Interesting!!

A growing body of research supports the theory that laughter may have therapeutic value.
For years, the use of humor has been used in medicine. Surgeons used humor to distract patients from pain as early as the 13th century. Later, in the 20th century, came the scientific study of the effect of humor on physical wellness. Many credit this to Norman Cousins. After years of prolonged pain from a serious illness, Cousins claims to have cured himself with a self-invented regimen of laughter and vitamins. In his 1979 book Anatomy of an Illness, Cousins describes how watching comedic movies helped him recover.
Over the years, researchers have conducted studies to explore the impact of laughter on health. After evaluating participants before and after a humorous event (i.e., a comedy video), studies have revealed that episodes of laughter helped to reduce pain, decrease stress-related hormones and boost the immune system in participants.
Today more than ever before, people are turning to humor for therapy and healing. Medical journals have acknowledged that laughter therapy can help improve quality of life for patients with chronic illnesses. Many hospitals now offer laughter therapy programs as a complementary treatment to illness

Do you agree? Do you use humour in a similar way? What helps you cope? It would be great to hear from you.