When I answered the phone, a few days ago and spoke to a friend of mine, I started with our normal banter about football. We usually discuss the latest rumours surrounding our football club, who we should or shouldn’t sign, and general ‘man rubbish.’ However this time was different. There was a very quick break in proceedings, and my pal announced that his wife had joined my club! For a minute, my mind went blank, and I assumed that he meant she had signed up to receive my blog notifications. He then very quickly followed that, by saying that his wife had been diagnosed with cancer!

That conversation prompted this weeks post. Due to my own personal situation, and the work that I do, I am talking cancer, on a daily basis. A lot of people have asked me if I would be better doing something else, but it just feels so natural now, it would feel strange without it! However, it does mean that I hear very frequently from people who are newly diagnosed. Of course, one of the early problems you face is how to break the news to others. Like most things associated with cancer, there is not one single answer. Everyone handles this issue differently too.

In my own instance, my diagnosis was such a shock, as I had been very healthy up to that point. There were a lot of people involved in my working life, and so many friends in my social world. We didn’t really know the full extent of things but knew that I was in poor shape. A lot of my normal life was going to stop quickly, and my appearance was going to change as the treatment regime, accelerated. I felt that I wanted people to know, about it, but wanted to do it personally, in a lot of cases. I just didn’t want that type of news spreading quickly, by phone etc.

It was very tiring and time consuming but within a couple of weeks, I had managed to tell most people who needed to know. I felt a whole lot better, the fact that I had explained things personally. But I had never considered how those people had felt, once I had told them! I then realised that it wasn’t always about me and what made me feel better. What I didn’t also realise, was that the way that people viewed me was also changed forever. Whether I like it or not, I am now seen as that guy who has cancer.

That helps me to understand, the people who don’t say too much, when they receive their diagnosis. I know someone who didn’t tell their partner until they were terminal. It really is a very personal decision. My experience has taught me how to handle this situation now, but there are times when even I am caught ‘off guard.’ There are two occasions that spring to mind. 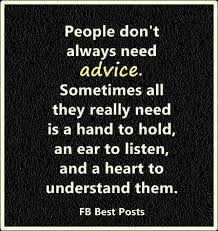 The first is when I was having dinner with a great friend of mine, and midway through the meal I was informed that they had cancer, which involved some serious surgery, and a lot of treatment. There was no warning, and I had no idea, but it had obviously been eating away in their mind, and it just came straight out! The second was when I was at a large social function. I met someone who I hadn’t seen for a long time, and asked them how they were. Again they came straight out and told me that they were in the middle of treatment, as they had relapsed, and things weren’t looking good.

Initially, I felt very awkward, but very quickly that passed, and I dealt with both situations. I know from my own experience, that you can feel better once you have got something off your chest, but most of us don’t consider how others might receive the information that you are giving them. It also taught me that if I felt awkward, with all the experience that I now have, how might anyone else feel? Is it any wonder that we may think twice about how we might tell people that we have cancer?

My own view has always been to get things out in the open. It has always seemed logical, that once you know all the facts, then that will help you deal with the issues. However, that is not everyone’s view and I know that a lot of people are just not comfortable, talking about personal affairs in public. Cancer is unique in so many ways, and this is yet another example of that.

How do you deal with delicate issues? Do you like to talk, or deal privately with things? If you have had a cancer experience, how did you deal with it?