One of the areas of my work that gives me most pleasure is working with young people affected by cancer. Unfortunately it is sometimes forgotten that many of the issues these guys face, are so different to those that us older people encounter. Things are beginning to change, facilities are improving, and support is growing for the increasing numbers of young people affected.

I am very pleased that the readership of this blog amongst young people is expanding rapidly, and this is in no small part, due to some of the wonderful contributions I have been able to share. Some very brave young people, who felt confident enough to share some of the toughest times of their lives, with the social media world.

One such person is Ann-Marie, who in her previous post described graphically, her battle with isolation. This piece was picked up around the world, and generated a lot of interest. As we all know, things can change very quickly, when you are living with cancer, and this has proved to be the case for Ann-Marie.

This young lady’s story, is so powerful and moving, that I wanted to update you on how things were going for her. Below, is a copy of her latest blog.

Yep, it has been a long time indeed. And thankfully things are finally starting to look up, the good thing being that this time round I can take it all in a bit better and embrace the happy feelings and proud moments rather than being scared of the next fall.
So, I’ve not blogged for such a long time because I had a lot of personal battles that needed to be addressed and if I had blogged during this time it probably would’ve looked something like this:
’OH F**K WHAT’S GOING ON? Nxlkwjfbejlrhbqwlvjhwbrpubsv tjlrhbviptub rtsb verw;kdbuv wb;  ARGH LEG ncadilsuhnfcfeiruhb v;iqubdipt4r w;jbv  q;ejbh  ARGGGHHH LIFE  SKHndac;ireubc yb ;erbvi;qubrkbj;bjbkfbdbakjbfkjbfnghbltyj   IT’S ALL GONE TO S#¡T ncjkblqefjb vljqt rlbhv t;kbqr vhr. WHERE’S MARRIZLES GONE?!!!! ;sdid cjsn,/./,][falekrbvlrbljj WHO THE FU*K AM I SUPPOSED TO BE?!! dpb qekjrb clrj lreqhbueilajdn WHY DID WE PAINT THE LOUNGE GREY?!! nfoiernwinvininornevonvnejnsjdiojsjlkcnlkdabfcjrbe  TAKE ME BACK!! Ndkjsjjgjijiornjnjgnonfnorninn DOES THIS T-SHIRT GO WITH THESE TRAINERS? ndncewcnjnirnwvineriunvckwnlcjknljcnlwjnfdjnlv nhfgf klngfngfongoifniofngoi)(*&^%$£@@!±±±±!@£$%^&*()____feirhfnvuithrn I’M NEVER GOING TO GET BETTER! Hhipfhviothrigtiorhngtrtuiwbiobgioebtitbgfjidjwoifjoinnfionfionoinfoinsoinntrngp3n5vitnegvjngtv jkntvntejntbvjkt NO-ONE UNDERSTANDS!! dnrinfrciuncuignvirtvitnrvjnn±!@£££$$%%%%^^^^^&&*(((()))))))))+++==gjnvjgjkt jykbnjtvnek;jn ejtk vj jktev etvtnjitoenrrhbeqhrqepundmszirort I HATE MYSELF ’.
Get me? Yeah, messy messy head. At times I resembled the character ‘Taz’ so best kept under wraps for everybody’s sake! I was also feeling very vulnerable at the time and didn’t want it brought up in conversation.
I started seeing an amazing Psychotherapist last October to help cope with the emotional fallout and psychological effect the whole thing has had on me.  It was very hard but definitely worth it! I feel a million times better and can finally start looking forward again. Obviously I still have down periods but they are nothing compared to the symptoms I was displaying before I started the programme.
I also learnt that I DO need time to grieve and instead of feeling guilty for feeling that way I should allow myself to do this, I have lost a lot. I know I have gained so much but the fact is, life will never be the same for me. I can find new ways of dealing with it now and different paths to take in the future but it takes time to accept this and I still find myself challenging it on occasions. As is with everything, it’s about balance. If I want to have down time where I can have a good old cry and F and blind about everything, I can. It’s perfectly normal, and it will pass.
The dreaded ‘anniversary week’ of my operations was awful. Despite going out and celebrating a year of my new knee it quickly came crashing down and thoughts of that time caused lots of emotions to resurface and it all felt very raw.
My friend Katy put me in touch with an amazing man called Chris who does a lot of work for various cancer charities. Chris asked me if I’d be interested in writing a piece, a while back, for his blog so I wrote about the problems I was facing at that time.
Here is thepiece
The piece was greatly received by people going through battles of their own and even retweeted by Macmillan as part of their #notalone campaign.
Chris’ blog is an amazing, open, honest account of the battles and feelings he faces. It’s wonderfully written and I have found myself screaming “OMG, YES!!! I feel exactly like that” at my screen on many occasions. I highly recommend this blog to be passed on to anyone you may know who has been diagnosed with cancer or has battled it in the past, as he also writes about issues that effect you after. I’d like to thank Chris again for encouraging me to open up and for being such an inspiration to me. Thank you!!
So yeah, that’s what I’ve been up to whilst hiding! In terms of my physical recovery, all is good in the hood at the moment *touch wood*. My Vascular problems are being managed, as is my pain after being referred to a pain management clinic. My recent Oncology appointments have also been very positive and the nodules in my lung have not grown for over a year now, which is very encouraging. Obviously all of this combined has helped lift my mood greatly and has enabled me to be more active. It feels so much better not to have all of those various problems bogging me down trus’, it all felt never ending! I still have problems with fatigue but I’m slowly heading in the right direction with that.
I’m glad that I can recognise traits in my personality returning and I am feeling a lot more confident now, it feels very refreshing after a long time spent feeling as if I was a stranger in my own body. Even if I am not fully back I can see the ol’ bulshy side coming back and wanting a piece of the action!
Now it’s time for something I’ve been looking forward to for SO long…
INTRODUCING ROBOLEG!!!!
Here’s ROBOLEG in it’s full glory. I had an appointment with my wonderful consultant this week and took a picture of my all time favourite accessory. This one is actually an x-ray from last year but I took a shot of this one because it is clearer with the positioning of the top and bottom of my leg so I can explain what’s what. I’ve been meaning to get a pic for so long but the last time I saw him I wasn’t in the right frame of mind as it was an emergency appointment during my setbacks.
It’s not the clearest of photos as I took it from the wrong angle in my flurry of excitement. He has given me permission to be a great big massive show off so here goes… ISN’T IT AMAZING?!!!! LIKE THE BEST THING YOU’VE EVER SEEN!!! I’ve seen it loads of times since I had it done but I don’t think I’ll ever grow tired of it. 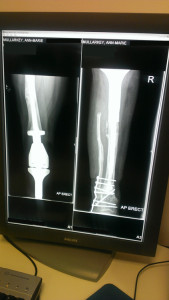 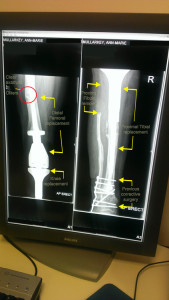 There has also been a MASSIVE breakthrough in research into bone cancers.
A team, led by Professor Adrienne Flanagan of the Royal National Orthopaedic Hospital (RNOH), was the first to identify a genetic mutation which is present in approximately half of all types of chondrosarcomas (the second most common form of bone cancer – the one that I had!!).
They have won an international award for this amazing achievement. This is such good news and I’m very proud to have given samples for this research. Change is on it’s way!!!!
You can read the full write up here
Over and out,
Marrizles. x
I would like to thank Ann-Marie for sharing this piece with me, and for the very kind mention. If you would like to read more please follow thislink.