It’s been some time since I wrote a new piece due to refocusing my priorities. Since Your SimPal has been live, approximately 6 months now, it has dominated my work. We are now helping increasing numbers of people across the country, and interest in our work is growing organically. It is challenging in so many ways, yet so satisfying knowing we can do something to improve the lives of many affected by cancer.

People now know me for my interest in innovation in the cancer sector. There are many ways to help with existing problems if only large organisations would ‘look up’ and search outside their safety zone. Main stream services have little imagination having been ‘corporatised.’ The problem us innovators face is that most funding goes to large organisations and we rarely get a look in! 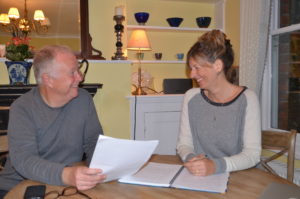 I am always on the look out for new ideas, and I was approached by Brian and Alison who talked about the joys of writing and receiving letters. Having never written a letter since I was at school I was sceptical, but when I looked further into it, boy was I wrong! This work helps me meet so many incredible people and Brian and Alison are two of those. They believed in what they offer and put all their efforts into the project. Not only is it now keeping them busy but they are passing their skills onto others via writing courses etc. I am now in the ‘e communication’ camp but I can really understand the joy of receiving a handwritten note. This shows how much value you have in someone’s life, as they want to take time and effort to physically write to you.

Of course there are very few new ideas coming into the world, and certainly not this one, but what a refreshing idea to help many people. I’m sure it would be a massive shock for a young person to receive a letter these days? Thank you to Brian and Alison for sharing their ideas and experiences with us!

Cancer can bring a sense of social isolation but there is a simple way to help.

‘When Brian Greenley was diagnosed with bowel cancer, he never believed that the letters that then acquaintance Alison Hitchcock offered to write to him during his treatment would change both their lives.  In 2009 Alison and Brian had met on yoga holiday in India. They got on well, meeting up a couple of times back in the UK, but neither would have described themselves as anything other than acquaintances. In 2010 Brian shared that he had been diagnosed with cancer. Perhaps because she didn’t know what to say, Alison offered to write letters to cheer him up.

Looking back, she says, she’s not sure what possessed her – by her own admission she was no writer. But a promise was a promise!  The letters began and over the next 2 years, as Brian’s cancer developed to stage 4, Alison kept on writing.   ‘I began to cherish the time I took for myself when I sat, alone, and wrote,’ said Alison. ‘It felt very good to be doing something for someone else and it took away that feeling of helplessness that friends so often feel when a loved one becomes ill.’   Her enthusiasm for writing was bolstered by Brian’s response to receiving the letters.   ‘Knowing that someone is caring enough to write, buy a stamp and put the letter in the postbox means so much,’ he recalls. ‘The letters helped me to feel reconnected with the real world.’

Brian had plenty of friends and family but still felt isolated during his cancer treatment. 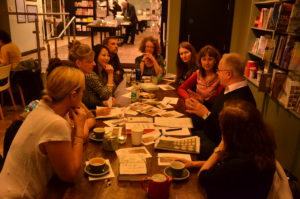 It is common that when someone receives a cancer diagnosis even the most well meaning friends can distance themselves, fearful of what to say and how to say it. As the cancer patient may now be absent from work or no longer be at the school gates, they become detached from their community, increasing that sense of social isolation.  Southampton University’s 2016 report, written with Macmillan Cancer Support, concluded that cancer patients feeling socially isolated are three times more likely to suffer from depression.

Lead researcher Professor Claire Foster said: ‘People can feel isolated following their treatment and those with limited social support are at greater risk.’ A similar study in 2013 found that one in four people will lack support from friends and family during their treatment.  ‘Something as simple as a card or letter makes you feel reconnected again,’ said Brian. ‘Knowing that someone is thinking of you can change your whole outlook on the day.’  Fast forward to today. Brian is now 4 years clear of cancer, Alison’s letters continue, even if less frequently, and the once acquaintances are now best of friends.

The letters encouraged Alison to leave her job in the City and instead pursue an MA in Creative Writing, write a novel and have short stories published.  Brian began a health and wellbeing blog aimed at men over 50. After having their letter story recorded for the BBC, the pair were inspired to start a national campaign, From Me to You, which encourages people to write letters to friends suffering from cancer – keeping them connected at a time when they feel most disconnected.  From Me to You runs letter writing workshops, they speak at events and the website hosts writing tips on what to say and how to say it and shares many inspirational stories from those who have received and sent letters.

In June this year, Alison will take part in her first triathlon to raise funds for Bloodwise and From Me to You.
‘Small donations can make a real difference,’ she says. ‘At workshops we provide all the stationery and stamps and for those that can’t make a workshop, we send out letter writing packs which include everything you need to give you the inspiration to write.’  Support her here to raise funds to keep their letter writing workshops on the road.’

In many instances it is the simple things that mean the most!