I’m sure that during the last few weeks you will have either read about, or experienced personally, the incredible work done by the volunteers and London Ambassadors, at the Olympic games. In many reports that I have seen and heard, it has been said that this was one of the most memorable things about the games. How everyone was so friendly and helpful, and how professional the volunteers were.

As I am directly involved, in volunteering, in several different areas, this came as no surprise to me! Every week, and in many contrasting environments, I see people, bringing their very different skills, to a cause they believe in, to help improve things. Without these people, a lot of organisations wouldn’t be able to provide the services that they do.

The true power of volunteers, in my opinion, is that because the cause that they are working for is close to their heart, they come with a passion and energy, and come from a different direction to paid employees. Our time is very valuable, and we all choose very carefully how we spend it, therefore if we volunteer time to a cause, we must really believe in it.

If this energy is captured and built upon with relevant training and encouragement you can see what a valuable part a volunteer can play. However, I sometimes feel, that because people work without pay, that their role is slightly undervalued at times, so I was very pleased to read the recent Olympic reports, which have put volunteering back in the headlines, and will hopefully encourage more people to get involved.

I am very fortunate in the things I do, as I work with charities, both local and national, and the N.H.S, and of course I am a patient, so I get the opportunity to see cancer care from many differing perspectives. One of the things I feel that needs to improve is, how we work together. This is something I am keen to encourage in the work I do, so when asked, by Macmillan Cancer Support to talk to a new group of interns about life as a cancer patient, I was excited. I have always felt that this would help people understand the real reason, we raise money, and help them to understand how their work fits in to the bigger picture.

When feedback from the induction was presented, it showed how useful they had found my talk, and I was pleasantly surprised to be approached a week later by four interns who asked if they could find out more about cancer, and the work I do. I spoke to several professionals at St Georges, who were very keen to set up an information sharing afternoon, and having confirmed with Macmillan, I organised a trip for the team to see a Macmillan Information Centre in action. We also visited a couple of wards where people are treated, and St Georges charity, where I and many others raise money for the hospital. 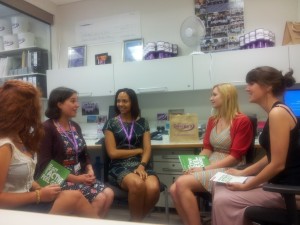 What a fantastic learning experience, this turned out to be for everyone concerned! Obviously, the Interns experienced a lot of things for the first time, but they could now fully understand the effect of the work they do. They also saw the contrast of a local charity, and how different it was to Macmillan. More importantly, they understood better, more of the problems that people affected by cancer, face.

The professionals were absolutely thrilled to be able to talk about their work, and were very proud to be a part of talking to people from Macmillan h/o. I know that they really wanted to play their part in helping them understand more. In fact it was a great opportunity for them to learn first hand, what different people do at h/o.

The interns were telling me how so many of their colleagues would like to also take part in a trip like they had done, and I would like to think that this is something that we could offer in the future. What I took from the day was the feeling of togetherness, that happened very quickly.Although we were all doing different things, very quickly, we became a team, and could all understand how our different work all fitted together.

I would like to thank both teams at Macmillan Cancer Support and St Georges in Tooting for making the trip happen, and thank the Interns, for thinking proactively, and asking to learn more. We have seen in the last few moths of what can happen when we all come together. The Jubilee, the Olympics etc. Something has ignited the feelgood factor, so let’s do our best to keep it going!