My post last week about the charity world received so much feedback and opened up many more questions! I was directed to the below piece about Cancer Research UK, the biggest cancer charity in the UK. Despite the name I have often wondered what they do and how they work, with such an incredibly large budget. I asked around and nobody was really clear. Then I was pointed to the article from Chris Woolams which I have featured below.

“Is it just me who thinks that Cancer Research UK is really just a Pharmaceutical company hiding under the pretext of being a cancer charity; a wolf in sheep’s clothing? When we interviewed the Chief Executive a few years back and asked him his aims he answered immediately, “To get more people into clinical trials on drugs than in any other country”. One would have hoped that the aim would have been rather more concerned with all potential cancer cures with a little more patient-focus.

I think what prompted me to write this was a couple of really biased blogs appearing on the CRUK website, making claims about the dangers of thinking diet might help treat cancer, and another about how new drugs and better diagnosis were the reasons for improving cancer outcomes in the UK. I was left wondering what happened to rigorous research. Then almost immediately, I read an article on how the UK was now to have its first Protion Beam Therapy machines – this is the modern version of radiotherapy without the beam dangers of damage before or after the tumour or scatter around. A Cancer Research spokesperson half dismissed it by talking about new therapy and no research. Proton Beam Therapy was invented by the MD Anderson Cancer Center in 2006. They have masses of research on it!

Is it just my imagination or is anything that is not a drug treatment to be criticised openly by CRUK?
CRUK has claimed in recent press releases to be employing 4500 scientists across the UK. Most do drug research, or investigate the precursors, identifying cancer pathways, genetic situations or protein blockages that might lead to drug development. Talking to an eminent oncologist recently he told me, “If we weren’t so bogged down doing all this drug research, we’d have cracked cancer by now”.

And CRUK claim to have been responsible for the research and development of a number of drugs.

When we asked them which ones, they referred us to a page on their website detailing just four, of which the most recent was Temozolomide in 1987. In more recent times, CRUK’s website just makes rather hazy references to their part played in new drug launches. When we asked their PR department, they told us this was because CRUK does all the initiation, research and development and gets the process to a point where the idea is handed over to a drug company who has greater resources. So, this positions CRUK as an R&D laboratory for several Big Pharma firms.

In return, CRUK receives royalties from those firms for drugs that are subsequently developed. Rather proudly, I was informed by the CRUK PR employee that this amounted to over £20 million a year. Forgive me, but if I were Chief Exec of CRUK, I’d expect a lot more than that. But then we know that CRUK receives other grants from Big Pharma anyway, so maybe some is in there. Goodwill gets everywhere these days.

CRUK is quite important to Big Pharma too. It is widely known that Big Pharma sales reps call on Doctors with their helpful information sheets and sales aids. Bribery and fraud cases from America to China show the nature of Big Pharma ‘inducements’ to Doctors and Health Care workers. But drugs cannot be advertised or promoted in the UK to the general public. Cue ‘the charity’. On their website they provide endless information about the benefits of the drugs as treatments for cancer. However, rarely does the CRUK website talk about specific side-effects of a drug, more usually just referring to a more generalized list. The net effect is an overall glow – positive coverage – for most, if not all, drugs.

But isn’t advertising as Jeremy Bulmore once said ‘The provision of information in order to change attitudes and cause people to take action’? And if more people feel favourable to Temozolomide when offered it by the oncologist, wouldn’t that push up sales of the drug, and then consequent royalty payments? Are CRUK exempt from the 1939 Cancer Act as a charity?
Like Big Pharma, CRUK also employs ‘bloggers’ to get the message across. Frankly, it’s just one big skeptic ‘blogging’ community. For example, CRUK bloggers focus on the benefits of drugs over those of rival treatments such as foods despite, for example, a whole scientific area – that of ‘epigenetics’ making cancer correcting discoveries all the time on the benefits of bioactive natural compounds from sulfurophanes to curcumin.

CRUK bloggers talk of the rigours of scientific research in the same month as the Editor of the Lancet says half of drug research is false; and the FDA says 40% of clinical trials are flawed. CRUK bloggers also make outlandish and unproven claims such as “We’re beating cancer due to better drugs and earlier diagnosis”, while American studies show the inadequacies of current diagnostic tests from PSA to mammography.

The American Cancer Society’s 2012 report that there has been an ‘explosion in research into complementary therapies, and those of diet, weight control and exercise increase survival and can even prevent a cancer returning’ has no part in CRUK’s mythical claim, nor does the ability of a women to comb the Internet and find things she can do for herself to increase her survival times. Completely ignored are the benefits of Complementary Centres such as The Haven or Penny Brohn.
The stance of Big Pharma and CRUK is indivisible.

And what of the funds raised by the skydivers and runners? CRUK is ‘The official partner’ of the London Marathon. No wonder; last year it was worth more than £22 million to the charity. 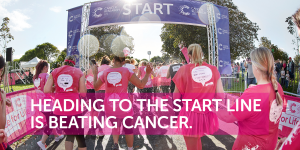 How many runners understand that CRUK has highly paid Trustees, management and staff that put its admin costs on a par with those of Big Pharma? How many understand that CRUK pays search engines like Google to put CRUK articles at the top of its search engines. Yet this ‘pay per click’ is technically free for charities. How many runners understand some of their money is going to Google? It pays for a new piece on apricot kernels, amygdalin and laetrile which follows the Big Pharma blogging code – jumble up the various issues so it just all looks dangerous, and then get it to the top of the search list, so it looks authoritative. Job done. Another possible natural cancer treatment rubbished

The largest cancer charity in Britain should only have one aim, that being to increase the survival of cancer patients BY ANY MEANS. If that means four cheap old, out-of-patent drugs, or chewing aspirin, so be it. If it is ultrasound melting tumours, great. If it is a natural compound mix, even better still.

Instead of telling people not to go in the sun (because 3,000 people die of skin cancer a year) shouldn’t CRUK be trumpeting the fact that 280,000 people develop cancer and all of them seem to have low vitamin D levels and that the vitamin D level is predictive of survival times? (Not to mention that MS, Rickets – currently making a UK comeback in children) and other illnesses seem to be linked to lower vitamin D levels).

Shouldn’t CRUK be looking at exactly how melatonin supplementation could prevent more hormonally driven cancers, now that it has been proven that disturbed sleep patterns result in more breast and prostate cancers? Shouldn’t they be happy that there is so much research coming out of American Medical Schools on the benefits of curcumin in cancer treatment? Or concerned that some drugs actually can even CAUSE cancer to spread and/or return, rather than write biased nonsense saying, ‘We have always known that cancer can return’ and sweeping it under the carpet?

CRUK. You only have yourselves to blame that, like Big Pharma, a growing proportion of the UK population distrust and even despise you. You are just not appealing to smart people – you are not the smart choice.
We know that your Trustees have vested interests; we know you are joined at the hip to Big Pharma; and we know that your employees hound innocent old ladies to raise funds, as my friend witnessed just last week even after all the negative press coverage.

All this from a ‘company’ run by a man who once described organic food as ‘dangerous’ in an interview with the Daily Telegraph, when he was running bio-tech firm Sygenta. You’re just not smart. We want far more that this blatant bias from the number 1 cancer charity in the UK. No, we expect it. And people with cancer deserve it.”

This blog is longer than usual but I thought it was important to publish the piece in it’s entirety. I would like to thank Chris for sharing his views, which are very much inline with my own. It would be great to hear your thoughts which as always you post below.