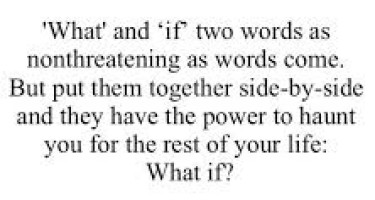 In my previous post I talked about the value of time, something I am beginning to be very aware of in my life. Being on fortnightly treatment, those days become markers in my life, and they seem to come round with increased speed.In the last few weeks I have been able to fit in some really exciting projects, and I have been asked numerous times about my working life before cancer, by people I have only recently become acquainted with. Therefore they don’t know anything at all about my experience.

However, they seem genuinely surprised by the variety and quality of the projects that I am involved with. This causes me an element of internal frustration! In my regular working life, I would be doing a lot of difficult negotiations, for fun, and I would be selling goods and services, around the world. So the work I am able to do now feels somewhat insignificant by comparison. This prompted my worst thought for a long time. What if I didn’t have cancer?

I tried very hard not to think about that, as I knew it would take me down a path I shouldn’t really go down, but I was in a very stimulating conversation, with someone who also had their career cut short by cancer. They weren’t thinking at all like that, and are doing great things in the cancer world, including writing a book. They had accepted how their life was going to be, and are living their new life now. Not necessarily happily, but without the emotion of anger to drag them backwards.

This made me feel slightly envious, as I still struggle to accept my own situation, and am battling my demons, on some occasions pretending to myself, that things will eventually return to how they were. I don’t really know why that is, as I am a very realistic person, but I seem to have some sort of block in accepting that my old life will not return.

My work has become a lot more ‘joined up’ and public now. My fund raising, speaking and writing, function as one, and this blog is the heartbeat of it. So without thinking too much, I have created an international presence now. This has all happened because of my illness, and something that I am only able to do in between treatment regimes. That sometimes feels like trying to drive the car, whilst the handbrake is still on!

Why did the “what if?” question enter my mind. It hasn’t done for a while. After 6 years I would have expected those feelings to have almost ceased, but obviously that fire is still burning inside. I think my frustration, was also for the other person, although they showed none at all. I was angry that they too had lost the opportunity to fulfil their potential in a work environment. Cancer has certainly given me new experiences, which I would never have encountered, however it has also taken away, many of the major ingredients of my old life, without asking!

Possibly, that might be the answer. I love doing the work that I do now, but it wouldn’t have been my chosen path. I would have still been on the crazy ‘hamster wheel,’ chasing work and money. In some masochistic way, I enjoyed that life and it stimulated me. If a slower path was an option that I had decided on, that would have been ok.

When I was diagnosed back in 2007, I was towards the top of my game, and I always felt that there was a lot more to come. In many respects I feel cheated, that the opportunity to fulfil my working potential was taken from me. however I also feel angry when I see what it does to others. Maybe I have used that anger positively, to enable me to do what I do now? However it still feels like negativity in my mind. Did I fail to reach my potential, or am I doing it in a different way? I have to now believe the second option!

Do you ask yourself this question, with anything you are involved in? Maybe you have had choices and made the wrong ones?

I am an official support partner of the Grove Hotel in Bournemouth. The only hotel in the UK specifically for people affected by cancer and other life limiting conditions.