It is a great honour for me to host the below blog. It is exclusively written by the wonderful Athena Lamnisos CEO of the Eve Appeal who do such incredible work. I am always happy to get involved with these guys as they are a small but very impactful charity. Collaboration means a lot to us both, and I have been involved throughout the month with their #GetLippy campaign. In this piece Athena tells us more.

“The history of the instantly recognisable pink ribbon is an interesting one. The idea came from a grassroots campaign led by a breast cancer activist, who wanted a symbol to highlight the issue that a mere 5% of the United States’ National Cancer Institute budget (of $1.8 billion) was dedicated to cancer prevention. That campaign started over 25 years ago, in 1992 and with Estee Lauder has raised incredible sums to support research in breast cancer.

So here we are in 2018, and guess what percentage of cancer research funding in the UK goes to prevention? Just under 4%. And that’s what’s dedicated to focused research in prevention across all cancers. And there I was thinking that prevention is better than cure. There’s a great deal to fund under the huge cancer umbrella, including better treatments, more patient support and much needed palliative care services, but please let’s not forget that earliest possible detection and investment in screening are also vital.

Prevention and early detection are where lives will be saved, particularly for the women-specific cancers. 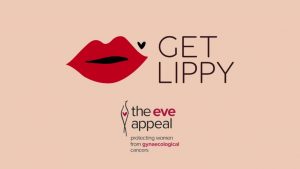 Gynaecological malignancies are often diagnosed at a later stage and therefore the women they are affecting are given a poor prognosis. Wouldn’t it be better if we could have stopped her gynae cancer before it had a chance to start?

Campaigning for women’s health is an endless mission. Gynaecological disease is surrounded by taboos, embarrassment and a sheer lack of knowledge. Awareness that five completely separate gynae cancers even exist is painfully low. Normal, frank conversations about what’s in a woman’s pelvis are few and far between, which means that periods, menopause, reproductive health and the correct terminology for parts of the body just aren’t understood.

We need to campaign, we need to raise awareness and we need to talk. That’s why women’s cancer charity The Eve Appeal has launched Get Lippy. It’s a spectacularly literal campaign – we’re asking you to get lippy, talking up and out about gynae cancers and their signs and symptoms, and we’re asking you to buy a lippy that’s supporting the campaign during May.

Like the origins of the pink ribbon, Get Lippy started with two brilliant young campaigning women who saw the need to make cervical screening, aka smear tests, something that more women understood and therefore booked their appointments. One was a make-up artist, Linda Andersson and one was a PR professional, Caroline Muhlich and together they created a brand that was engaging, consumer facing and which could sit with serious health messaging behind it. They launched the campaign in 2013 and it ran for three years and raised funds for three great and relevant charities – Eve, Jo’s Cervical Cancer Trust and Cancer Research UK. It only ran during cervical awareness weeks and it only focused on raising awareness of this particular cancer.

Caroline and Linda showed great insight on where they could make the most difference by creating a brand called the Red Lippy Project, glamorous, aspirational and a perfect fit for high street retail, which is where our message about prevention needs to hit. Last year, they asked Eve if we’d take the brand on and develop it. We saw the potential immediately and that’s how Get Lippy came to be. 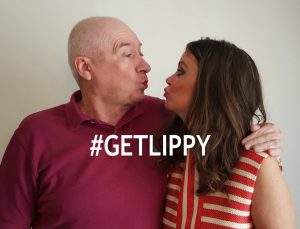 A campaign that immediately tells you what to do and how to take action. A campaign brand that we hoped retailers and partners could sign up to. And they have.

Moving away from red lipstick was vital – we need the young and old, men and women to Get Lippy about these cancers. We wanted a campaign that could include a whole range of partners and was accessible to all. We didn’t want anyone to be able to say ‘this campaign isn’t for me’, ‘it’s too young, too trendy’, ‘the products are too expensive’, ‘I can’t find them.’
Support from brands, health campaigners, social media influencers, policy makers and clinicians has been overwhelming.

What’s been really incredible has been the support and warm welcome from women and the people who love and care about them for this campaign. Gynae cancers needed their version of the pink ribbon. And hopefully, with Get Lippy we’ve found it. For many months of May to come.

We’re having a day of action on the 25th May where we need everyone to pout for a purpose (god knows there’s enough pouting without any purpose on social media) and show support and donate to medical research in women’s cancers.”